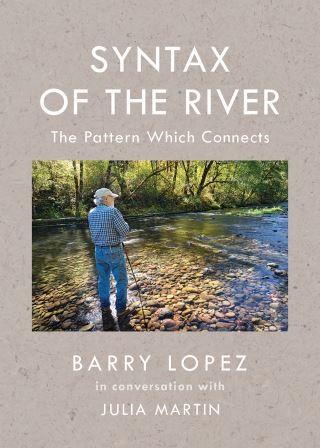 Syntax of the River

The Pattern Which Connects

Barry Lopez had no illusions about the seriousness of our global crisis, yet he also felt a deep conviction about the power of hope and the sources of renewal in the living world. Syntax of the River is an extended conversation spanning three days between Lopez and Julia Martin in which he explores what this juxtaposition means for him as a writer.

On the first day Lopez reflects on years watching the McKenzie  River near his home in Oregon. He describes the quality of attention he learned from intimacy with the place itself: a very fine distinction between silence and stillness, the rich complexities of the present moment, and the syntax of interrelationships between living things.

The second day is concerned with craft: the work of making sentences and books. Lopez shares his practical strategies for writing and revising a manuscript and goes on to speak about vulnerability. He says he often experienced a deep sense of doubt about his capacity to achieve whatever he was trying to do in a particular project. Over time, though, this characteristic experience of not-knowing became a kind of fuel for his work, and even a weapon at times.

On the final day, Lopez ponders the idea of writing as a praxis, a way of life, even a prayer for the earth, while concurrently being terrified by the portents of its destruction. Here, the experience of being an attentive participant emerges as his core teaching. Over the decades he developed a practice of attention that was endlessly curious and enthralled by the living world, what he calls its pattern or syntax. Despite acclaim as a celebrated writer, throughout his career Lopez humbly tasked himself with making a combination of wonder and horror work together to effectively communicate a life journey of contemplation, exploration, and discovery.

Barry Lopez was an essayist, author, and short-story writer who traveled extensively in both remote and populated parts of the world. He is the author of Arctic Dreams, which received the National Book Award; Of Wolves and Men, Home Ground: A Guide to the American Landscape; and eight works of fiction, including Light Action in the Caribbean, Field Notes, and Resistance. His essays are collected in two books, Crossing Open Ground and About This Life. Lopez lived in western Oregon.

Julia Martin is a South African writer and literary scholar. Her longstanding involvement in the work of Gary Snyder is part of a broader interest in ecological thought, metaphors of interconnectedness, and the representation of place. She enjoys experimenting with creative nonfiction, and her travel memoir, A Millimetre of Dust: Visiting Ancestral Sites, is a narrative essay about archaeology and the apprehension of deep time. She lives with her family in Cape Town, where she teaches English at the University of the Western Cape.