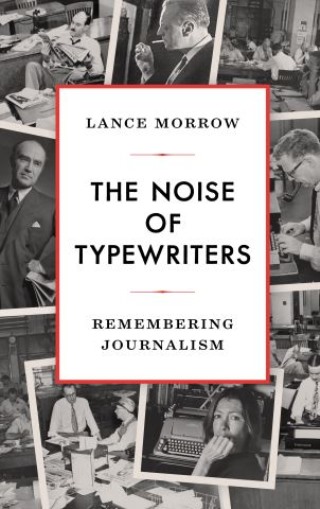 The Noise of Typewriters

W.H. Auden famously wrote: “Poetry makes nothing happen.” Journalism is a different matter. In a brilliant study that is, in part, a memoir of his 40 years as an essayist and critic at TIME magazine, Lance Morrow returns to the Age of Typewriters and to the 20th century’s extraordinary cast of characters—statesmen and dictators, saints and heroes, liars and monsters, and the reporters, editors, and publishers who interpreted their deeds. He shows how journalism has touched the history of the last 100 years, has shaped it, distorted it, and often proved decisive in its outcomes.

Lord Beaverbrook called journalism “the black art.” Morrow considers the case of Walter Duranty, the New York Times’ Moscow correspondent who published a Pulitzer Prize-winning series praising Stalin just at the moment when Stalin imposed mass starvation upon the people of Ukraine and the North Caucasus in order to enforce the collectivization of Soviet agriculture. Millions died.

John Hersey’s Hiroshima, on the other hand, has been all but sanctified—called the 20th century’s greatest piece of journalism. Was it? Morrow examines the complex moral politics of Hersey’s reporting, which the New Yorker first published in 1946.

The Noise of Typewriters is, among other things, an intensely personal study of an age that has all but vanished. Morrow is the son of two journalists who got their start covering Roosevelt and Truman. When Morrow and Carl Bernstein were young, they worked together as dictation typists at the Washington Star (a newspaper now extinct). Bernstein had dedicated Chasing History, his memoir of those days, to Morrow. It was Morrow’s friend and editor Walter Isaacson—biographer of Leonardo Da Vinci, Albert Einstein, and Steve Jobs—who taught Morrow how to use a computer when the machines were first introduced at TIME.

Here are striking profiles of Henry Luce, TIME’s founder, and of Dorothy Thompson, Claud Cockburn, Edgar Snow, Joseph and Stewart Alsop, Joan Didion, Norman Mailer, Otto Friedrich, Michael Herr, and other notable figures in a golden age of print journalism that ended with the coming of television, computers, and social media. The Noise of Typewriters is the vivid portrait of an era.

Lance Morrow is an American essayist whose work appears regularly in the Wall Street Journal and City Journal. For many years he was an essayist for TIME magazine. A winner of the National Magazine Award for essay and criticism, he is the author of nine books. He lives in upstate New York with his wife, the author Susan Brind Morrow, and is the father of two sons.